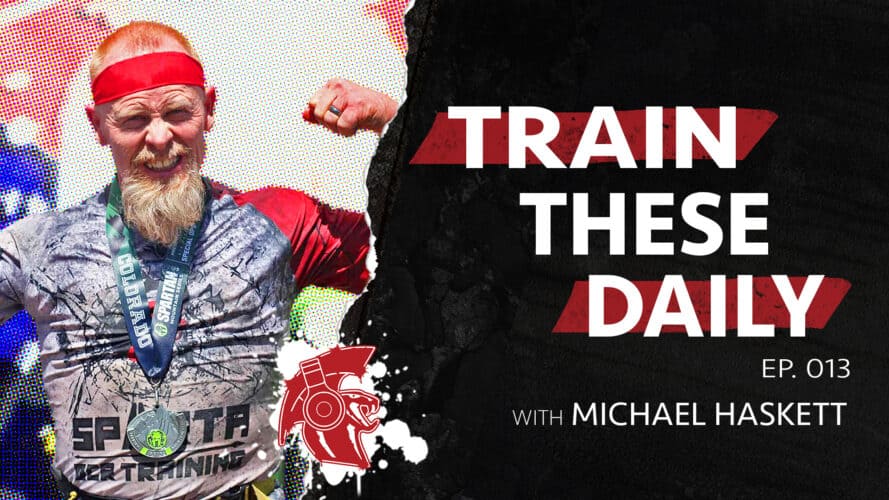 From Economic Crash To Personal Boom

SpartanSGX coach Michael Haskett tells how he got started in obstacle course racing (OCR). Following the economic crash of 2008, Michael moved to Bozeman, Montana. A few years later, he came across an ad for a local Spartan Race that was happening a couple of weeks later. He did not know where the actual venue was but he felt appealed by the challenge to do the race.

The Sparta OCR head coach gave everything he had in that first race and almost collapsed at the finish line. Although Michael  felt fit enough for the challenge, he had not run for a while… which meant 26 years ago, in high school. The OCR coach still ran a clean race, i.e. he succeeded at all the obstacles and even nailed the dreaded spear throw.

“Don’t waste time and energy over the uncontrollable. Take what you have and make it something great.”

Strategically, knowing it was the most failed obstacle in all of Spartan Race, Michael Haskett had practiced throwing spears at the official pre-race party, which offered a practice area. After a couple of tries, he had memorized the feel and technique of the throw for the following day’s race. Wisely, Michael did what he had to do to avoid the 30-burpee penalty coming with a failed throw.

As a matter of fact, Michael went on to do 9 other races before missing his very first spear throw.

Finding Out At The Finish Line

Motivated and determined, Michael Haskett went all out in his 1st race, a 5K Spartan Sprint, which he actually sprinted the whole way. Even though he red-lined at the finish line, the personal surpassing the race stimulated got him hooked to the sport immediately.

Despite calves that we sore for a whole week after this inaugural race, Michael persevered and completed a Spartan Beast in Utah the same year. Reminiscing about his experience, he remembers the severe cramps he got while racing the hard 25K course. But, still, the OCR coach from Montana finished the challenge, like a true Spartan would.

Passing On To Others

Eventually, Michael Haskett got certified as a personal trainer, as he desired to improve others’ lifestyle through fitness. Witnessing how OCR could change people’s lives, Michael got a specific certification in Spartan Race training (SpartanSGX) and used obstacle course racing as a S.M.A.R.T. goal to motivate his trainees.

3 Weak Points You Should Address Now

Listening to OCR coach Michael Haskett, I agree that not fully realizing what you’re capable of might be one of your greatest obstacles. Limited by your own mind, it could be hard to believe that you actually can crush obstacles on a race course or that you can overcome the figurative obstacles that you come across in Life.

A solution is to break obstacles of all nature down into simple steps and learn how these smaller elements are accomplishments. Progressively, you’ll realize how better you have become and how capable you really are.

As common and easy as running may seem, the body actually needs to adapt to the repetitive nature of the activity, which can be taxing on inferior  chain joints and IT bands. As a workaround, you can build an aerobic base first through cross training, i.e. swimming, cycling or rowing. As your capacity increases, start a progressive running program, which may include a walk/run alternance (ratio 2:1).

Decent grip strength is essential for the many overhead obstacles you will encounter on an OCR course, per example: monkey bars, rings, rope climb. Need to improve on your capacity to support your own body weight ? Pick up heavy weights of different formats: buckets, kettelbells, dumbbells, sandbags. Perform dead (and active) hangs with mixed grips on a pull-up bar.

See how long you can last and challenge yourself on your next workout.

Follow @@senseisayspod
Sensei Says Podcast · 10 hours ago
@senseisayspod
Trained at 110% and still not getting those top results ? 💁 @DrDonVaughn says: it's your 🧠.